In this series of books the author, with 14-years of research, sets out to chronicle in greater detail than ever before the story of 1 July 1916. Two volumes are presently available with another three to follow.

Volume I sets out to narrate the story of XIII Corps and the successful assaults by 30th and 18th Divisions. As the only Corps to achieve all its objectives for 1 July 1916, the book seeks to determine why this success was attained, when so many other units along the front barely crossed No-Man’s-Land. Using previously unseen material and utilising untold accounts it analyses the build-up, preparations, intelligence, weapons, tactics, training, rehearsals and attack undertaken at Zero Hour, Z Day between the villages of Maricourt and Mametz.

Volume II studies, then analyses operations undertaken by XV Corps, comprising 7th, 21st and 17th Divisions. Like the previous book detailing XIII Corps, focus is on the successful southern flank of the British Fourth Army attack. Under the command of Lt. Gen. Henry Sinclair Horne, XV Corps achieved virtually total success on Z Day, finishing the job the following morning. In so doing, they drove the Germans from Fricourt Spur, the lower slopes of Montauban Ridge and captured the bastion villages of Mametz and Fricourt, killing many of the enemy and capturing over 2,000 prisoners. Their achievements were at the polar opposite of what British folklore would have us believe regarding the supposedly futile and blundering events of 1 July 1916. 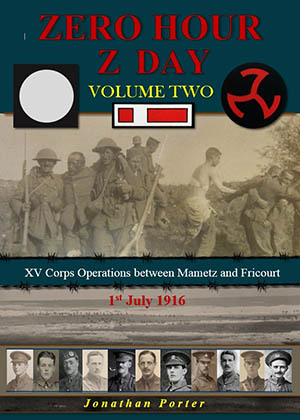